“CHITOSE Group” (core legal entity name: Chitose Laboratory Corp., hereinafter referred to as “CHITOSE”), a leader in the bioeconomy, and the Ministry of Investment of Saudi Arabia (MISA) have announced a new cooperation agreement for the industrial development of The Kingdom of Saudi Arabia. 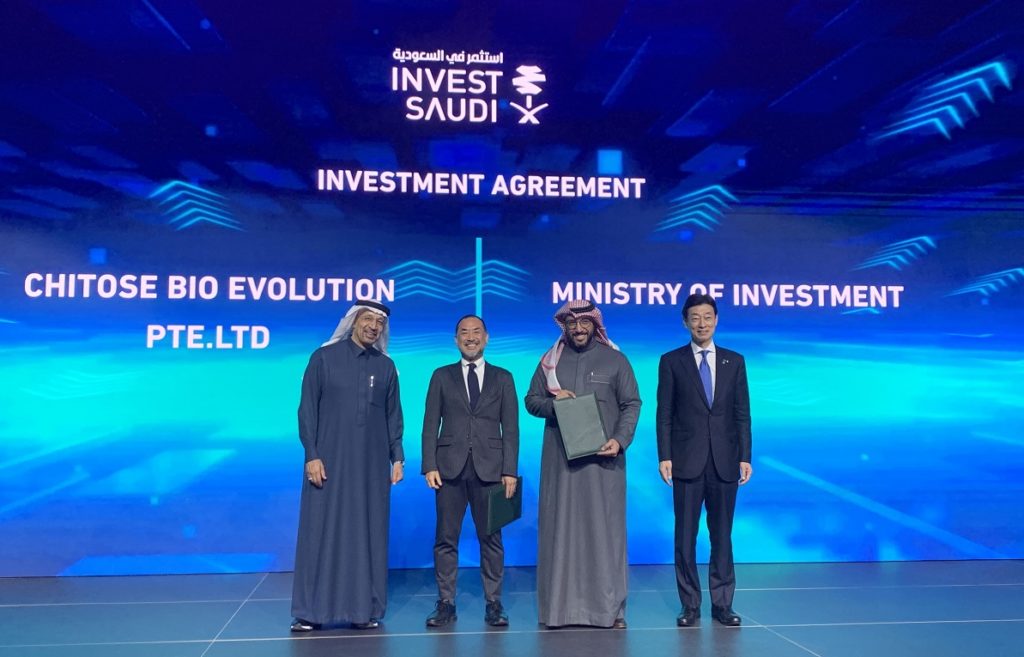 Through this cooperation, CHITOSE will support the development and production of a variety of bio-products (e.g., fuel, food, pharmaceuticals, supplements, plastics, etc.) in The Kingdom of Saudi Arabia using biotechnology that utilizes “small living things”, such as micro-organisms, microalgae and mammalian cells.
In addition, this cooperation will strengthen the manufacturing industry in The Kingdom of Saudi Arabia. In addition, this will create a public-private biotechnology industry, and accelerate research and development described on the ‘Saudi-Japan Vision 2030(*)’.
Furthermore, CHITOSE and MISA will contribute to Saudization (the promotion of domestic industry in The Kingdom of Saudi Arabia) by building a framework for the human capital ecosystem through enhancing research and development, and promoting innovation in the private sector.

※Saudi-Japan Vision 2030
https://www.mofa.go.jp/files/000237093.pdf
A strategic partnership to achieve the national social-economic visions of both countries, combining the Saudi Vision 2030, that Saudi Arabia’s national reform plan to end dependence on oil and to realize the job creation, also contributing Japan’s national growth strategy.
This vision reinforces the energy and manufacturing sectors, as well as entertainment, healthcare, and start-up innovation, etc.

―
Ministry of Investment of Saudi Arabia (MISA）
https://www.misa.gov.sa/en/
MISA is the government agency responsible for investment promotion and development of the investment environment in The Kingdom of Saudi Arabia.
Its predecessor, the Saudi Arabian General Investment Authority (SAGIA), was elevated to the Ministry of Investment following the reorganization of ministries in 2020.
CHITOSE Group
https://chitose-bio.com/
CHITOSE Group is a family of biotechnology companies operating mainly in Southeast Asia and Japan with an aim of leaving mankind with an environment where they can live in abundance for over 1,000 years. Developing the business in cooperation with the state and numerous companies towards the realization of a bio-based society, armed with material production technologies that utilize living organisms, such as micro-organisms, microalgae and mammalian cells.